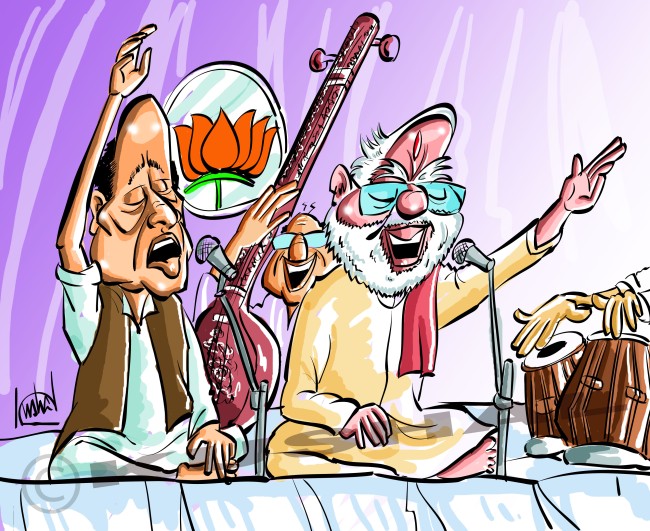 The BJP made a desperate attempt to distance itself from the bill to overturn the SC verdict against convicted MPs/MLAs, after having first supported it. At the same time, it continues to support the overturning the other SC verdict – that chargesheeted candidates should not be allowed to contest elections – on the grounds that the law & order machinery was in the hands of the state governments and they could misuse this provision against political opponents. Implicit in this is the assertion that we should be worried about corrupt cops, but not about corrupt judges. I beg to differ.

It is well known that corruption in the lower judiciary is rampant. Here are some statements made by prominent people in just the media in the recent past:

In a story in OutlookIndia.com, titled “Corruption Is Rampant In The Lower Courts” (http://tinyurl.com/ppnxhuw), former CJI, Justice VN Khare, when asked if bribes were endemic in bail cases says “There is no doubt about it. It is rampant. Corruption in the lower courts is no secret. Sometimes, in the high court as well, cases of corruption have surfaced”.

In a story in The Hindu titled “Judiciary not untouched by corruption” (http://tinyurl.com/pz4pv7a), present CJI Justice Sathasivam says “I should fairly admit that the judiciary is not untouched by corruption. When we take the oath as judge, we swear to be fair and impartial in all our judicial functions. However, on some occasions in the past, few judges have wilfully dishonoured the oath by adopting to corrupt practices”.

And of course, in their famous statements, both Prashant Bhushan (In my view, out of the last 16 to 17 Chief Justices, half have been corrupt. I can’t prove this, though we had evidence against Punchhi, Anand, and Sabharwal on the basis of which we sought their impeachment”) and father Shanti Bhushan (eight were definitely corrupt, six were definitely honest and about the remaining two, a definite opinion cannot be expressed whether they were honest or corrupt) have made the same point, but this time at the level of the apex court.

Leave the Bhushans’ bizarre assertion aside. At the lower courts however, one has to agree that corruption does exist, and whatever laws we design should keep this reality in account.

So lets re-look the provisions of the proposed ordinance. What did the ordinance really say? Did it really give convicted MPs/MLAs the “free ride” that we were made to believe first by the media and then the opportunistic BJP? Or was the ordinance actually proposing a significant improvement over the current situation, where convicted law makers were indeed getting a free ride?

Kapil Sibal is quoted in the TOI dated September 25th as making the following points:

1)    The member will lose membership of the House if his appeal is rejected. In other words, if a higher court rejects the appeal, the member will still be impeached.

2)    Even during the pendency of the appeal, a convicted MP or MLA will not be eligible to vote or draw other privileges that he is entitled to because of the conviction. In other words, its hardly business as usual. Laloo may have remained in Parliament, but he would not be able to help the Congress, as is alleged, in touch voting situations.

Taking the extensive corruption in the lower judiciary into account, why is it not possible that a state government could use it to “fix” an MP or MLA in the same way it could use the police to fix an opposition candidate? How can the BJP take the specious stand that the first is a risk that is acceptable (hence it doesn’t support the amendment/ordinance), but the second is not (hence it supports the amendment to the Act)? Is this not a case of obvious double standards?

My own view is that given the pathetic state of our police force (poor forensics capabilities, huge corruption, untrained personnel) and an almost similar situation in the lower judiciary (corruption, backlog, incompetency), it is only fair that the MPs/MLAs should not lose their seats unless at least theHigh Court convicts them. We can hope that a High Court decision will be more honest, but not the lower court’s. Relying on the wisdom (?) of the lower courts could be the equivalent of jumping from the frying pan into the fire. We will all feel smug we have done something “to purge the criminals”, but in reality, we will only be making things worse.