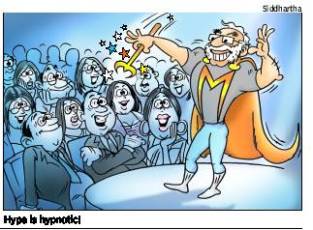 Blatant and vitriolic criticism of Narendra Modi seems to have become the norm for Gujarati dailies of late. Gone are the days when the Gujarati print media, with an average issue readership of more than 1 crore (according to IRS 2011-Q2), mostly adored the chief minister. It supported, or at least was non confrontational about his publicity blitzkrieg and his self-projection as a tough, non-corrupt, pro-development, ‘No. 1’ leader with a subtle and not-so-subtle communal slant.
As is evident from events of the last few months, Modi has been constantly at the receiving end in many issues — be it the arrest of Sanjeev Bhatt or his three-day Sadbhavana Fast. The prominence and the column space allotted to arrest and release of IPS officer Sanjeev Bhatt in the Gujarati media would have been unthinkable a couple of years back.
While English dailies reported the whole episode with restraint, news and images of Sanjeev Bhatt were being highlighted on first and last pages of Gujarati dailies. Bhatt was made out to be a ‘singham’ — a hero.  The pro-Sanjeev Bhatt coverage was not just about appreciating the uprightness of the officer but was fuelled, to a large extent, by the anti-Modi ‘line’. Gujarati dailies had a field day when the late Haren Pandya’s wife vaguely pointed her finger towards the CM in her husband’s murder.
Recent rhetoric against the Modi government, which was, in effect, against Modi himself, took off from very unusual point: the issue of cow slaughter. The issue was hardly discussed in the public forum. But suddenly the failure of the Modi government in protecting cows became the war cry in two major Gujarati newspapers.
The purpose of the intensive news campaign that ran for days was to prove that Modi was un-Hindu, if not anti-Hindu. It was to falsify his deeply entrenched claim of being ‘the saviour of the Hindus’.
Even the usual non-political Modi-baiters were baffled by the anti-cow slaughter campaign which gathered momentum so suddenly. The stage was set, and then came the burning issue of the appointment of the Lokayukta.
Gujarati dailies grabbed the issue with both the hands, one daily even lowering its masthead with the news of the appointment of the Lokayukta by the Governor and the government’s legal challenge to it.
When the Supreme Court referred the Gulbarg Society case back to the lower court and declined to monitor it further, Modi famously tweeted ‘God is Great’ and projected the SC’s decision as a ‘clean chit’. Many news channels echoed his view, but Gujarati dailies were more cautious and less jubilant.
His three-day ‘Sadbhavana Fast’ was treated with scepticism and a pinch of sarcasm, due to the pomp and politics involved. There was criticism about the expenditure incurred during the fast and even the memory of Mahatma Gandhi was invoked for an uncharitable comparison.
Gujarati dailies have been vocal in making allegations of corruption and in giving considerable weightage to the statements of Congress leaders in Gujarat recently. A Gujarati daily recently devoted a full page to CAG’s criticism of various departments of the Gujarat government. A clean image no longer remains Narendra Modi’s USP, at least for the Gujarati dailies.
Mostly unfavourable and critical of Modi, for the reasons best known to them, Gujarati dailies have been conscious not to indulge in anything that may be perceived as ‘secular’ by a majority of their readership. During the Sadbhavna Fast, Modi’s advances towards the Muslim community were met with veiled criticism. One Gujarati daily even frowned at his attempted pro-Muslim approach in a eight column banner head line: ‘Allah-o-Akbar: Modi begins his fast’.
The real irony is, Gujarati dailies with their massive reach have been successful in reflecting general sentiment but their capacity to generate or shape public opinion has diminished considerably — more so in the case of Modi’s criticism. Yet, there is a strange equilibrium between the anti-establishment stance adopted by the Gujarati dailies and Modi’s wide-spread popularity.