Why is Gujarat so “backward” in education? Blame it on government schools, and promote private schools. This is the new mission sought to be put forward by one of the most high profile education advocacy groups, Pratham, which has stolen the limelight all over India for its work with policy makers for the last about eight years. This, apparently, is the only reason why, it indicates (but does not say so directly referring to the state), that Gujarat’s educational standards are so poor. And, it seems to believe, it is not government schools which can come to the children’s rescue but only a rigorous emphasis on private schools.
According to Pratham’s Annual Status of Education Report (ASER), brought out by Pratham on January 15, 2014, Gujarat’s performance in ensuring admission to its rural children at the primary level is worse than 11 out of 20 major states. While a mere three per cent Gujarat children in the age-group were recorded as “out of school”, only eight states performed worse than Gujarat on this score. Worse, the ASER found that the situation deteriorated for the girls in the age group 15-16 (higher secondary level), Gujarat’s 29.7 per cent girls were “out of school” compared to all other 19 major states (click HERE for details). 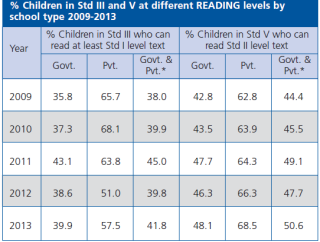 The Pratham survey, which becomes the basis of the national policy makers to push through their educational programmes, also found that in quality of education, too, Gujarat has performed equally badly. Thus, it reveals that Gujarat’s 26.8 per cent of children studying in classes VI to VIII could do division sums, which is lower than all other states but two – Madhya Pradesh and Assam. Further, children of just four states studying in classes III to V were worse performers than Gujarat in carrying out subtractions.
Things would not have been so bad, ASER tries to imply, had Gujarat emphasized on private schooling in rural areas. In rural Gujarat, 15.1 per cent children in the age group 6-14 go to private schools as against the “best performing state” in education, Kerala, where 68.6 per cent go to private schools. The national average of children going to private schools is double that of Gujarat – 29 per cent. Then, Gujarat’s children spend Rs 140 per month on tuition, as against Rs 231 in Kerala. Here, too, the national average is high – Rs 169.

“ASER 2013 indicates that although the proportion of families owning TV has not changed over the past five years (54 per cent in 2013), the proportion of those among TV owners who have access to cable TV has gone up from 36 per cent in 2010 to 79 per cent in 2013. That is, nearly 43 per cent of all rural households have cable or direct to home TV. Half of these families send their children to government schools today and may shift to private schools if they become accessible”, he says, adding, this is because “we have a clear failure of government schools to deliver or even basic achievements in learning.”
Further: “There is a need to urgently deal with the trend of enrollment in private schools in urban and rural areas. Banning private schools or even curtailing them is no more a democratic option unless a visibly better government school alternative can be presented. By introducing 25% reservation for economically weaker sections, the Right to Education (RTE) Act has in fact opened the door for unaided schools being aided by the government. There is no reason why government-aided and privately managed schools cannot be encouraged further”.

Arguing thus, Pratham does not recall even once that private schools are refusing admission to children from the poorer, weaker sections (read HERE). On the contrary, he thinks that “the segregation of children, even among the poorer sections, into those who go to government schools and those who attend private schools is socially undesirable and the option of government-aided and privately managed schools which function autonomously can in fact help create schools where all children can go to school together.”
Chavan underlines, “States where nearly half the rural population and considerably larger urban population send their children to private schools could lead the way in this matter. Discussions being held at different international platforms suggest that the next Millennium Development Goals for education will be much more focused on measurable learning outcomes.” This, thinks, can be done by discarding the view that the government schools can deliver: “ASER maintains that learning outcomes, especially in the government schools in most states, are poorer today than they were a few years ago.”